on May 15, 2020
Hey Procraftinators! Today, we are celebrating Courtney Kreeber's 10K YouTube subscriber milestone! That's right, she has reached 10,000 subscribers! How cool is that?! Congrats, Courtney! I'm so excited that she asked me to be a part of her hop. So, to honor her, I decided to use my new Copic markers to create this card. As I stated in my last blog post, I just recently got a Copic marker collection for a screaming good deal. So, although I am not all that new to alcohol markers, I am new to Copics. 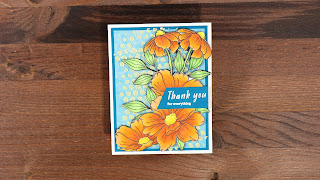 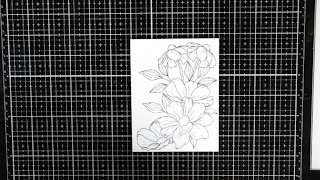 I used Simon Says Stamp's Over the Rainbow stamp set to create a floral arrangement using masking. I started by stamping the large, open flower in the corner of my 4x5.25in panel. Then, I masked it off and stamped some more flowers around it. I just kept stamping flowers & masking them off until I was happy. Then, I moved onto leaves and kept stamping those until I was happy. Once I was done with the leaves, I removed all the masks to reveal my floral arrangement. 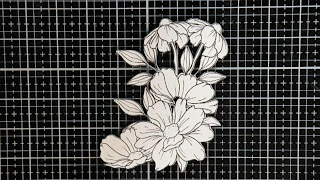 Then, I used my Scan N Cut to cut the floral arrangement out. When I did that, I also used the "pattern" that my Scan N Cut created when cutting that image out, to cut the same cut on 2 pieces of plain, unstamped Neenah 80lb cardstock, so that I could layer those behind my stamped piece. This was not only so that I could add dimension behind my die cut, but for stability as well. Some of those leaves hanging off the side were very delicate and I was afraid that I might break them off during the coloring process. 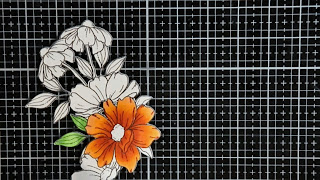 For the coloring, as I said before, I used my new to me Copic markers. For the flowers, I used YR02, YR04, YR07, YR09, & R08. I started with my darkest color, R08 and applied that to all my shadow areas and moved down the line blending out to my lightest color, YR04. I know that a 5 color blend may seem a bit excessive, but I felt that with these colors, it gave me the best blend to use all 5 colors. Do what works best for you. For the leaves, I used YG13 & YG17. For some reason, I really struggle with leaves and foliage. So, I decided to keep this really simple. I shaded with YG17 on the base and the tips of the leaves and blended in the middle with the YG13. Initially, I left the flower centers white. We will discuss this a little later on. So, I will come back to what colors I ended up using for the centers. 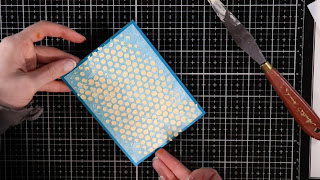 Next, I moved on to the background panel. I wasn't sure what color to use with these gorgeous orangey red flowers. Then, I remembered that my friend, Renee, from Delaney Jane Cards had recommended I download the Copic phone app when I got my Copics and I had noticed that it had this tool in there for complimentary colors. I pulled up the tool and selected one of markers I used for coloring the flowers and it suggested various BG colors. I went over the my cardstock and chose a couple colors that matched those BG markers. Then, I matted them together and decided to pull out some Nuvo Crackle Mousse in Ivory Coast and a Tim Holtz Bubble stencil. I applied the mousse through the stencil and set it aside to dry and crackle. 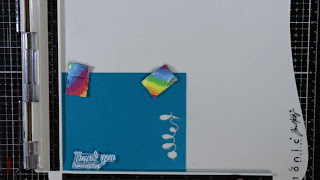 I stamped a "Thank You for everything" in Versamark ink and heat embossed it in Wow Opaque White embossing powder on one of those teal cardstocks that I used for the background panels so that everything would match. I cut it into a slanted sentiment strip and set it aside for later. The sentiment came from the same SSS Over the Rainbows stamp set. 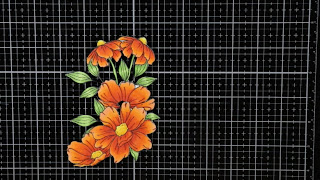 So, when I cut out the floral arrangement with my Scan N Cut, you may have noticed that the 3rd flower from the bottom was missing the center from it. I somehow missed that the Scan N Cut was going to cut the center out, which was not my intent. I didn't feel like re-stamping that entire arrangement so I figured that I would just figure out a fix for it later. My initial thought was that I would fill in all the centers of the flowers with Nuvo drops. At one point, I decided to go around the edges of my die cut with a black marker to make it look more finished and my marker slipped and hit that same flower, adding an extra black mark to it. Most probably wouldn't notice, but it bothered me. So, now I had 2 mistakes to cover on that flower. So, I nixed the Nuvo drop idea and decided to just cover both mistakes with a sentiment strip. So, here is where I colored in the remaining centers with my Copics. I used Y02, Y08 & Y17 and just stippled them in the centers. 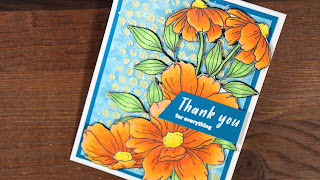 After finishing up the coloring, I mounted my card panels on my card base and then mounted the floral arrangement to the card. I stuck my sentiment strip over my boo boo and then applied Nuvo Aqua Shimmer Pen over the flowers. Of course, as usual, I stamped the inside of my card. I used the large open flower and I included on of the birds from the stamp set. I wanted to include on of the birds on the front, but I felt like I had so much going on already that I just left it off. So, I felt like the inside was a perfect place to stamp one and that finishes off the card for today. I hope you enjoyed the card today and as always, I hope you have a great day! 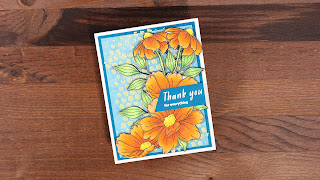 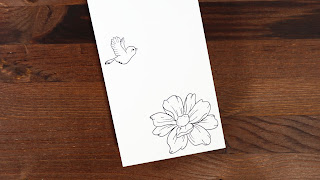 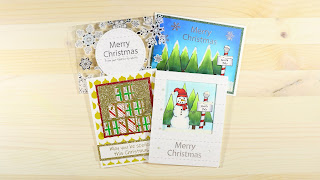 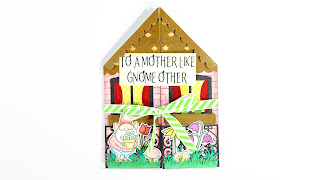 Hey Procraftinators! I am so excited, because today, we are celebrating my 500 subscriber milestone! I can't believe that I made it this far. As I write this, I am just barely shy of 700 subs, actually. I scheduled this hop when I was about 50 or so subs away from 500 and because I was part of the Save the Crafty Youtuber hop, I soared right on by 500 and am now almost to 700! I never thought when I started this channel that I would make it this far, honestly. It was something I did on a whim from the encouragement of my husband. He thought that I should start a YouTube channel to help pass my time, as I am a stay at home wife due to being partially disabled. I thought he was crazy when he suggested it and that no one would want to watch my crazy antics in the craft room. I guess he proved me wrong! So, this hop's theme is fun fold cards. I have always enjoyed unique or interactive cards the most of all cards. The more unique, the better, honestly. However, when I started try 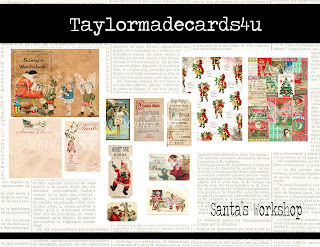 Hey Procraftinators!  Today, I am so excited, because I am sharing my first guest design project. I am guest designing for Taylormadecards4u . Monica, the owner, has a bunch of fun stuff that she sells on her site - from the cards she makes to awesome digital kits.  You should check her out! Today, we are going to talk about one of her passport kits.  The Santa's Workshop kit to be exact. I have included a picture of the kit here & will point out the elements that I used as we go along.  I was extremely impressed by the quality of the images when these came out of my printer. The colors were bright and crisp. They are gorgeous! I chose to do a bit different project with this kit. I know, I typically make card videos. However, I am a woman of many talents and I do occasionally make things out of paper, other than cards. I thought it might be fun to make a Christmas Recipe Book with this kit. I know the images don't scream cooking. However, I had my m 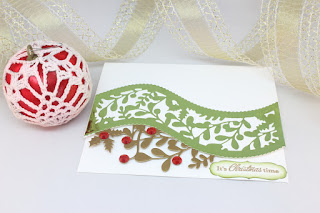 Back with another challenge card. Today, I am participating in the CAS Colours & Sketches Challenge #298. I had a lot of fun with this challenge. I again, used dies from the Tonic Craft Kit #11 Festive Wishes. If you can't tell, this is a favorite of mine this season. I cut a the border die out of Holly Green Mirror Card From Festive Lights by Craft Perfect by Tonic Studios and then used the plain border die in the craft kit to cut a matching edge out of the front of my card base, so it would be shorter in the front to allow room for the gold holly piece to hang down. Next, I cut the holly pieces that hang out from under the green metallic holly border out of a scrap of gold metallic cardstock from my stash. I glued the green metallic holly border to the gold metallic holly piece and then attached both to my card base. Next, I heat embossed my sentiment with gold embossing powder by Ranger and I used the stamp & die set Snowflakes by Art-C by Spellbinders. I placed this o

Today, I have a quick tip for you on how to make your own, cheap and easy magnetic mat for the foil quill. Now, I am using this on my Cricut machines. So, I can't vouch on whether this would work for any other machine. Though, I don't see why it wouldn't. But I am just throwing it out there that I really don't know if it will. So, try it at your own risk if you have a different machine. Overall, this cost me about $6 for the metal sheet and everything else, I already had on hand. So, it was pretty inexpensive way for me to do this. I bought a M-D Building Products 56032 1-Feet by 1-Feet Galvanized Steel Sheet from Amazon and then took a Industrial, Super Permanent Sharpie and a T Square ruler and drew the grid lines on it. I used the lines from the Cricut mat as reference to make sure everything lined up correctly. The reason I used a super permanant sharpie was I am hoping the lines won't rub off so easily. I also used an old Cricut mat that no longer sticks an